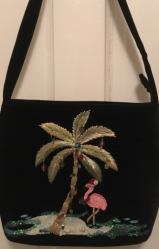 I have always been fascinated with bags. The fact you could put something in another thing and carry it conveniently was always appealing.

Backpacks in particular have always been my “go to” bag, quickly followed by the uber cool messenger bag. Their particular allure was all the places you could go with one of these sleek, stylish bags slung over your shoulders. The things you could put into them…oh you know, the THINGS!

Back then, the more pockets and compartments, the cooler the bag. As kids shopping in K-Mart one day, my cousin and I found our dream bag; a turquoise Jordache backpack, complete with an insulated lunch box & thermos! Talk about the epitome of cool to a couple of ten year old girls growing up in the 80’s!

However, as a young lady in waiting, I also had a fancy for purses. I was an adventurous sort & I would go to garage sales and look at all the bags and unwanted “valuables” of others.

One day, on such an adventure, I found a purse, and as I was exploring the depths of this treasure, it rattled. There was buried treasure within the treasure itself!

The garage sale purse had holes in the very fabric of its being, yet the structure was sound, however, the lining, that which was entrusted to keep the valuables in place had failed. It allowed for the valuables to slip from their place, and collect and congregate in the structure, but they no longer had a specific place to be in the garage sale purse; it soon belonged to me!

An entity in my life has been vexing my soul of late. An ancient verse in the seldom-studied book of Haggai came to mind when thinking about this particular structure, entity and treasure… “You earn wages to put money into a purse with holes in it….”

The entity itself, and the structure, is not mine, but I am a part of it. However, much like the garage sale purse, I feel like the fabric has lost its ability to hold its valuables in place. Some are now floating aimlessly while others have found a new place within the structure.

Alas, now the question is, where did that old garage sale purse and it’s hidden treasures end up? Perhaps one day, that old purse and I will cross paths again. Until said day, it is a mystery and a memory…

By day, I am a skilled Customer Service agent for a local logistics company. By night, I am an aspiring theologian, a minister in training, a lady in waiting and an overall, an awesome human being! Singlesliceofcheese was created as a random, whimsical blog created to kick Queen Crabby Pants out of my head! View all posts by Lynn