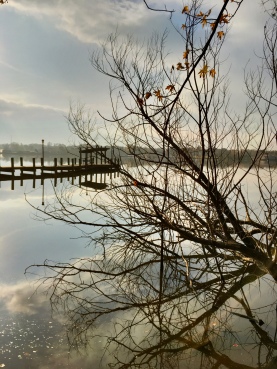 Living with the elderly, is not for the faint of heart…

One of my favorite movies, “Redwood Highway” deals in a small part with an adult child making a life altering decision for his mother. In the movie, the son put his aging mother into an assisted living community, she is NOT happy with his decision in the least. From the portrayal of her fitness in the film, one would have to agree, he made a rather hasty decision. While that is not the central theme, it bears reference as I feel I am wading into a new arena, making decisions for them who used to make mine.

It’s definitely an adjustment, trying to navigate from having decisions made for me, to being the one making the “adult” decisions.

Recently, I had to make such a decision; one that would indirectly affect me as it was regarding my father. He was scheduled to have a procedure done at the large University Hospital – one that might improve his quality of speech, or on the other hand, it might be of no value. My part in this was “do I voice my concerns, or do I stay silent?”

Here is where it got me…I had come home late in the afternoon from being out and he was still sitting at the dining room table – this was not terribly unusual, but what was, is that he had not finished his breakfast of two slices of toast. My mom had a nice dinner in the oven and our late lunch would soon be ready. He had been sounding “rough” over the last few days and perhaps this was the pinnacle, though one never really knows with another person how they’re truly feeling. He simply said he was feeling “blah”.

When dinner was served and he barely picked at something he normally eats with great gusto, I became more concerned. The procedure would have taken place in his throat, and as physically weak as he has been of late, I did not want to risk his not eating more than a bite or two because of pain, and thus growing weaker; with his already lackluster stamina.

Part of me wondered if I was being overly dramatic in this line of thinking, or if I was truly acting on the side of caution as I chose to voice my concerns. For reasons I cannot explain, both times, I was supposed to take him in the late fall and winter months, I was filled with apprehension about the trip; no matter how I much I tried to tell myself it would be okay. Both times something happened to prevent our travels. The first was a semi jackknifing in front of us taking out a pickup truck in its wake. The second was a fall or rather a slide onto the floor – a position from which he was not able to right himself.

For a while, I was questioning whether or not I had made the right choice in presenting my concerns regarding the upcoming trip to the University. Later as I was processing the events of the day, I realized it was not so much the decision I was questioning, rather, I was dealing more with the emotional side of the fact, all clocks wind down eventually. In large part, I think, in my limited capacity, I was trying to slow that inevitable winding down.  In the end, I know I made the right and best choice – but my question remains, does this ever get any easier?

By day, I am a skilled Customer Service agent for a local logistics company. By night, I am an aspiring theologian, a minister in training, a lady in waiting and an overall, an awesome human being! Singlesliceofcheese was created as a random, whimsical blog created to kick Queen Crabby Pants out of my head! View all posts by Lynn